Last year our survey of published case law from 2010 and 2011 identified 689 cases involving social media evidence for that time period. Since then, the pace has so rapidly accelerated that it became difficult to keep up with the deluge. 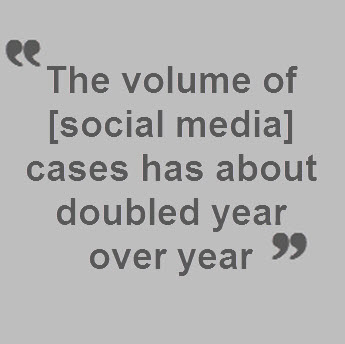 However, for this past month of September, a quick tally identifies 88 cases where social media evidence played a key role, which is consistent with our overall analysis that the volume of cases has about doubled year over year. Keep in mind that the survey group only involves published cases on Westlaw. With less than one percent of total cases resulting in published opinions, and considering this data set does not take into account internal or compliance investigations or non-filed criminal cases, we can safely assume that there were tens of thousands more legal matters involving social media evidence that were adjudicated, or otherwise resolved last month alone.

The following are brief synopses of five of the more notable social media cases from September 2013:

State v. Smith, (Supreme Court, Tenn.), Sept. 10, 2013 — S.W.3d —- 2013 WL 4804845; Tennessee Supreme court vacates first degree murder conviction on the sole grounds that one of the jurors communicated with a prosecution witness during trial via Facebook. The court lamented that Internet and social media “has exponentially increased the risk….of extra-judicial communications between jurors and third parties.” This decision is but one example of this common occurrence of juror misconduct through social media use, requiring attorneys and jury consultants to engage in on-going passive monitoring of publicly available social media information.

In re Hydroxycut Marketing and Sales Practices Litigation (US District Court, Calif, Sept. 17, 2013) 2013 WL 5275618. A federal judge disallowed an objection to a $25.3 million class action settlement as not credible. The court relied in large part on the objecting Plaintiff’s Facebook postings where she demonstrated a pattern of recruiting other people to be objectors to various high-stakes class action proposed settlements for compensation, including recent class actions involving HR Block and Discover.  This led the court to conclude that “her posts were aimed toward finding objectors…Clearly, Ms. McBean works closely with others who seek to represent objectors in class action lawsuits.” The court determined that the objecting Plaintiff was not a credible class member and struck her objection to the settlement.

Rodriquez v. Wal-Mart Stores, Inc., (5th Circuit. September 19, 2013)  — Fed.Appx. —- 2013 WL 5274468.  Plaintiff Virginia Rodriguez filed suit against Wal–Mart/Sam’s Club Stores, for discrimination based on age and national origin, and retaliation under the Texas Commission on Human Rights Act (“TCHRA”). Plaintiff’s serious violation of the company’s social media policy was the decisive employment offense which led to her termination. Wal–Mart’s Social Media Policy prohibits any conduct that adversely affects job performance or other associates. While the Social Media Policy allows employees to post complaints online, the comments cannot appear “unprofessional, insulting, embarrassing, untrue, [or] harmful.” The court determined that Ms. Rodriguez’s insulting Facebook comments regarding a co-worker were legitimate and not pretextual grounds for her termination. The Court dismissed her suit on summary judgment.

Fox v. Transam Leasing, Inc.   US District Court, Kansas. Sept. 18, 2013) 2013 WL 5276111. In this case, Transam Leasing sought the production of current archives of the Facebook and Twitter accounts of the Plaintiffs. The court found that such information would be potentially relevant to the litigation and overruled Plaintiffs’ “unfounded” objections. But the court did provide Plaintiffs the following option for responding to the social media request: “Plaintiffs shall provide the archive information, as requested…As an alternative, however, Plaintiffs may satisfy the requests by providing all of the following information from their respective Facebook and Twitter accounts: any discussions or complaints about defendant(s); any communications regarding the intent of any Plaintiff to sign up to drive for defendant(s); and any discussions about this law suit that is not subject to a legal privilege.”

Daniels Agrosciences, LLC v. Ball DPF, LLC, (US District Court, Rhode Island. Sept. 20, 2013) 2013 WL 5310208. This is another in a long line of cases where social media usage is considered as a factor in establishing minimum contacts for jurisdictional purposes. The fact pattern here is not unique, but this is the most recent example.