As part of our ongoing effort to monitor legal developments concerning social media evidence, we again searched online legal databases of state and federal court decisions across the United States — this time to identify the number of cases in the last 12 month period ending August 26, 2016 — where evidence from social networking sites played a sig 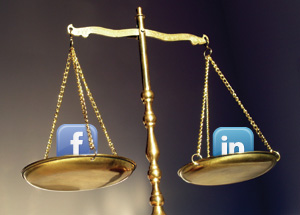 nificant role. The initial search returned over 14,000 results. That is far too many to review manually, but through random sampling to eliminate duplicates and de minimis entries — defined as cases with merely cursory or passing mentions of social media sites — we counted over 9,500 cases accessible through Westlaw. This represents over a 50 percent increase from 2015.

And as only a very small number of cases — approximately one percent of all filed cases — involve a published decision or brief that we can access online, it is safe to assume that hundreds of thousands more cases involved social media evidence during this time period. Additionally, these cases do not reflect the presumably many hundreds of thousands of more instances where social media evidence was relevant to a corporate or law enforcement investigation yet did not evolve into actual litigation. Even so, this limited survey is an important metric establishing the ubiquitous nature of social media evidence, its unequivocal and compelling importance, and the necessity of best practices technology to search and collect this data for litigation and compliance requirements.

The cases were generally split evenly between criminal and civil matters. The civil matters often involved personal injury/insurance claims, employment cases, family law disputes, and copyright/intellectual property. The following are a brief synopsis of some notable cases from the survey:

US v. Brown (D.C. No. 3-13-cr-00037-001) (3rd Circuit August 25, 2016). The opening line in the Federal Appellate Court’s opinion reads: “The advent of social media has presented the courts with new challenges in the prosecution of criminal offenses, including in the way data is authenticated under the Federal Rules of Evidence—a prerequisite to admissibility at trial.” The court goes on to rule that social media is not self-authenticating but must be authenticated through extrinsic or circumstantial evidence under Federal Rule of Evidence 901. I have previously addressed this issue concerning utilizing circumstantial evidence to authenticate social media evidence under Rule 901 and how social media investigation software is instrumental for that purpose.

Stewart v. State of Iowa (No. 14-0583) (C.A. Iowa, August 17 2016). Defendant brought a motion for mistrial after it was discovered (post-trial) through key Facebook evidence that several jurors appeared to be associated with the key witness, despite those jurors’ denials during voir dire. However, the court disallowed the screenshots of the Facebook pages as lacking proper authentication and denied the motion for mistrial. This case underscores the necessity of a timely and proper social media investigation (not mere screen shots), as well as the general importance of conducting social media due diligence on prospective and empaneled jurors.

State of Louisiana v. Demontre Smith, (La. Court of Appeals, April 20, 2016) In yet another court decision illustrating why software that supports best practices is needed to properly collect and preserve social media evidence, the Louisiana appellate court, 4th Circuit, issued a written opinion in a felony criminal case disallowing key social media evidence due to a lack of authenticity. Under cross-examination, the police officer, who offered the evidence in the form of screen shots, conceded that she lacked any corroborating circumstantial evidence to support the authentication of the social media posts. The appellate court ultimately ruled: “We find the social media posts the state seeks to introduce at trial were not properly authenticated, as the state presented no evidence in order to carry its burden at the hearing.”

Xiong vs. Knight Transportation, (D.C. No. 1:12-CV-01546-RBJ) (D. Colo. July 27, 2016). This case arose out of a personal injury from a major rollover traffic accident and illustrates the importance of performing a diligent and timely social media evidence investigation. The jury awarded the Plaintiff $832,000, finding that she incurred severe pain from her injuries, which impacted her social life and daily activities. Post-trial, a paralegal for the defense counsel found a litany of Facebook evidence apparently showing the Plaintiff taking a trip to Las Vegas, visiting nightclubs, attending a wedding and smiling happily with friends at restaurants. Despite this newly discovered Facebook and Facebook-derived evidence, the district court denied Knight Transportation’s motion, finding that “the new (Facebook) evidence could have been discovered before trial and Knight offered no justification for its failure to develop it earlier.”

In addition to case law, another metric reflecting the industry’s standardization of social media evidence collection is the sheer volume of sophisticated customers that have now adopted X1 Social Discovery. Over 400 eDiscovery and computer forensics services firms have at least one paid copy of X1 Social Discovery. I cannot think of a single service provider in the eDiscovery space that performs at least some ESI collection services that does not have at least one paid X1 Social license. Social media evidence collection is now a standard practice in many law enforcement matters as well.

So, if you are one of the minority of digital investigative or eDiscovery professionals who have not adopted X1 Social Discovery, please contact us for a demo today.