At X1, an essential component of our mission is to develop and support exceptional technology for collecting electronic evidence to meet eDiscovery, investigative and compliance requirements. It is also our goal to keep you abreast of important developments in the industry that could ultimately impact collection strategies in the future and, consequently, your business.  To that end, we believe key new Federal Rules of Evidence will have a very significant impact on the practices of our customers and partners.

In a nutshell, the new development is a significant planned amendment to Federal Rule of Evidence 902 that will go into effect one year from now. This amendment, in the form of new subsection (14), is anticipated by the legal community to significantly impact eDiscovery and computer forensics software and its use by establishing that electronic data recovered “by a process of dig 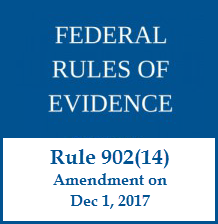 ital identification” is to be self-authenticating, thereby not routinely necessitating the trial testimony of a forensic or technical expert where best practices are employed, as certified through a written affidavit by a “qualified person.” Notably, the accompanying official Advisory Committee notes specifically reference the importance of both generating “hash values” and verifying them post-collection as a means to meet this standard for self-authentication. This digital identification and verification process can only be achieved with purpose-built computer forensics or eDiscovery collection and preservation tools.

Rule 902, in its current form, enumerates a variety of documents that are presumed to be self-authenticating without other evidence of authenticity. These include public records and other government documents, notarized documents, newspapers and periodicals, and records kept in the ordinary course of business. New subpart (14) will now include electronic data collected via a process of digital identification as a key addition to this important rule.

Rule 902. Evidence That Is Self-Authenticating

The following items of evidence are self-authenticating; they require no extrinsic evidence of authenticity in order to be admitted:

Data copied from an electronic device, storage medium, or file, if authenticated by a process of digital identification, as shown by a certification of a qualified person that complies with the certification requirements of Rule 902(11) or (12).

The reference to the “certification requirements of Rule 902(11) or (12)” is a process by which a proponent seeking to introduce electronic data into evidence must present a certification in the form of a written affidavit that would be sufficient to establish authenticity were that information provided by a witness at trial. This affidavit must be provided by a “qualified person,” which generally would be a computer forensics, eDiscovery or information technology practitioner, who collected the evidence and can attest to the requisite process of digital identification utilized.

The Advisory Committee notes further state that Rule 902(14) is designed to streamline the admission of electronic evidence where its foundation is not at issue, while providing a notice procedure where “the parties can determine in advance of trial whether a real challenge to authenticity will be made, and can then plan accordingly.” While this rule provides that properly certified electronic data is now afforded a strong presumption of authenticity, the opponent may still lodge an objection, but the opponent now has the burden to overcome that presumption.  Additionally, the opponent remains free to object to admissibility on other grounds, such as relevance or hearsay.

Rule 902(14) will most certainly and significantly impact computer forensics and eDiscovery practitioners by reinforcing best practices. The written certification required by Rule 902(14) must be provided by a “qualified person” who utilized best practices for the collection, preservation and verification of the digital evidence sought to be admitted. At the same time, this rule will in effect call into question electronic evidence collection methods that do not enable a defensible “digital identification” and verification process. In fact, the Advisory Committee notes specifically reference the importance of computer forensics experts, noting that a “challenge to the authenticity of electronic evidence may require technical information about the system or process at issue, including possibly retaining a forensic technical expert.”

In the eDiscovery context, I have previously highlighted the perils of both custodian self-collection for enterprise ESI collection and “print screen” methods for social media and website preservation. Rule 902(14) should provide the final nail in the coffin for those practices. For instance, if key social media evidence is collected through manual print screen, which is not a “process of digital identification” under Rule 902(14), then not only will the proponent of that evidence fail to take advantage of the efficiencies and cost-savings provided by the rule, they will also invite heightened scrutiny for not preserving the evidence utilizing best practices. The same is true for custodian self-collection in the enterprise. Many emails and other electronic documents preserved and disclosed by the producing party are often favorable to their case.  Without best practices utilized for enterprise data collection, such as with X1 Distributed Discovery, that information may not be deemed self-authenticating under this new rule.

In the law enforcement field, untrained patrol officers or field investigators are too often collecting electronic evidence in a manual and haphazard fashion, without utilizing the right tools that qualify as a “process of digital identification.” So for an example, if an untrained investigator collects a web page via the computer’s print screen process, that printout will not be deemed to be self-authenticating under Rule 902(14), and will face significant evidentiary hurdles compared to a properly collected web page via a solution such as X1 Social Discovery.

Also being added to Federal Rule of Evidence 902 is subpart (13), which provides that “a record generated by an electronic process or system that produces an accurate result” is similarly self-authenticating. This subpart will also have a beneficial impact on the computer forensics and eDiscovery field, but to a lesser degree than subpart (14). I will be addressing Rule 902(13) in a future post. The public comment period on amendments (13) and (14) is now closed and the Judicial Conference of the United States has issued its final approval. The amendments are currently under review by the US Supreme Court. If the Supreme Court approves these amendments as expected, they will become effective on December 1, 2017 absent Congressional intervention.

To learn more about this Rule 902(14) and other related topics, we’d like to invite you to watch this 45 minute webinar discussion led by David Cohen, Partner and Chair of Records & eDiscovery Group at Reed Smith LLP. The 45 minute webinar includes a Q&A following the discussion. We look forward to your participation.