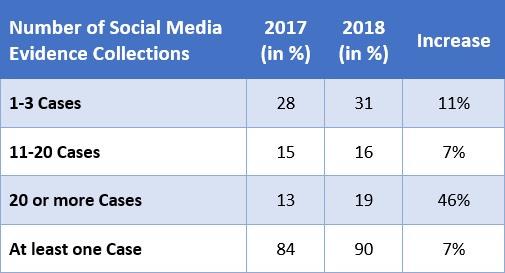 The final takeaway is that the practice of using screen captures with general IT tools like Adobe and Snagit is still commonly employed by practitioners at law firms, but is virtually non-existent amongst service providers, who typically are on the forefront of adapting best practices. Screen capturing is neither effective nor defensible.  They are ineffective because the results are very narrow and incomplete, and the process is very labor intensive resulting in much higher costs to the client than using best practices. (See Stallings v. City of Johnston, 2014 WL 2061669 (S.D. Ill. May 19, 2014): the law firm spent a full week screen capturing contents of a Facebook account — which amounted to over 500 printed pages — manually rearranging them, and then redacting at a cost of tens of thousands of dollars).

In addition, simple screen captures are not defensible, with several courts disallowing or otherwise calling into question social media evidence presented in the form of a screen shot image. This scrutiny will only increase with Federal Rule of Evidence 902(14) now in effect. I have previously addressed Rule 902(14) at length on this blog, but in a nutshell, screen captures are not Rule 902(14) compliant, while best practices technology like X1 Social Discovery have the critical ability to collect all available metadata and generate an MD5 checksum, or “hash value,” of the preserved data for verification of the integrity of the evidence. The generation of hash values is a key component for meeting the requirements of FRE 902(14).

The ILTA Litigation Practice survey results can be accessed here. For more information about how to conduct effective social medial investigations, please contact us, or request a free demo version of X1 Social Discovery.